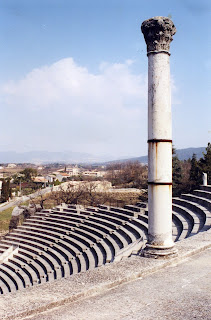 ﻿﻿
By the beginning of the 1st-Century AD glass had been in production throughout the Middle East for at least 2,500-years. By this time colouring techniques, moulding and fusing had been got down pat, while glass blowing and the production of clear glass by adding manganese dioxide had been developed the previous century. It was these latter two technologies that revolutionised glass production in the Roman world...and affects us still today. Blowing into moulds is still used to this day for every bottle you buy, and if you're looking out a window at the moment then you're probably looking through a Roman idea. Clear glass meant glass panes and by the late 1st-Century AD, Roman houses were getting a whole lot more daylight and whole lot less damp thanks to the glass window. Of course the Roman style of window pane was somewhat different to ours, with molten glass being poured into flat moulds sitting on beds of sand. As a result one side of a Roman window pane always has a gritty translucent appearance thanks to those grains of sand it was poured over.