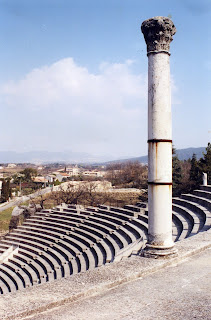 Oil has caused all sorts of troubles for us...Japan bombed Pearl Harbor because if it, and Germany invaded Russia because of it. The Gulf War...one and two? Oil is the grease of this modern world, take it away, and everything stops. So far this hasn't happened - but if you a want a lesson in what would happen if it did, then we need only look to the fall of the Roman Empire - the First Millennium's great oil shock. Of course, it wasn't sweet light crude back then, it was olive...but don't think for a moment the Roman world collapsed because the deep-friers ran dry. Just like modern crude, olive oil kept the lights on, it kept the wheels of industry and trade turning and every last person used it for skin lotions and bathing...just as the petrochemical plants provide for us today. Now just imagine what would happen if one day you went to the supermarket and found every single product you relied on wasn't there...and then you went home and sat in the dark - all because your government couldn't stop a bunch of Visigoths and Vandals cutting off the oil supplies from France, Spain and North Africa. One by one the provinces drifted away from the core, siding with the northern barbarians just so the lights would come on at night again. Now, perhaps this sounds all too simple, but think about...put yourself in their position. If your government stopped providing for you - but some else offered to help instead...what would you do to keep the lights on?

Find out if Calvus could keep his lights on
Posted by Unknown at 16:08